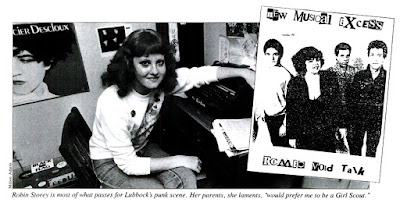 "Robin has put out sixteen issues if her contribution, called New Musical Excess, and there are at least a dozen other publications in Texas - and hundres around the country- in various shapes, sizes, and degrees of dormancy or vitality. In Fort Worth, King Vitaman, who doubles as drummer for a band called the Hugh Beaumont Experience, puts out Throbbing Cattle. Dallas has Steel Press. Austin has had such stellar efforts as Chattering Pest, Western Round-up, Duck Butter, the Austin American Stainsman, Plan 9, and, peraphs my favorite, Xyphoid Process, which is put out by a really sweet kid named Control Rat X. Houston's finer examples have included Hymnal and Wild Dog. San Antonio has Alamo Rag, and a University of Texas at Arlington student named Murry Hammond puts out AKA. The smallest known center of punk culture is the tiny Wise County town of Boyd, outside Fort Worth, where Darryl Smyers puts out Small...But Effective.
They're all known as fanzines, or just plain 'zines for short. Most are photocopied, appear irregularly, and are printed up whenever the publisher has enough money. At their most basic, they're about nothing but music: Western Roundup devoted an entire page to listing 106 Austin bands, including such immortals as God on Toxic Drugs, Jerryskids, Young Bankers, and Kamikaze Refrigerators. Hymnal, a dark, jumbled gaggle of type and pictures that's a perfect analogue to a long night of punk debauchery, gives off the most insistent feeling that the world could end at any minute. And I don't even want to know the story behind Strange VD, a horror that makes the others (well, maybe not Hymnal) look like Modern Bride. But the more ambitious ones, such as Xiphoid Process (named after a bone in your chest that serves no purpose whatsoever) or Throbbing Cattle (which bills itself as "Culture for Mammals"), have something to offer in the way of off-the-wall social commentary or punk philosophy. Xiphoid Process is probably the funniest, and it has the most ecumenical musical tastes."
(from the article "Invasion of the Zines" appeared on the nov. 1982 issues of Texas Monthly here) 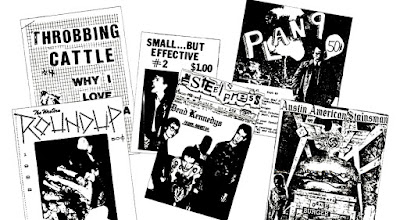 Posted by Salty Sternthots at 1:19 AM