There's very little infos about this synth-wave combo from Detroit, Michigan. They self-released a single in 1983 of weird electro in a d-e-v-o-luted way with a Wall of Voodoo vibe. The single is credit to Darryl Miglio, Rick J. Ritts and Keith Anderson on synthesizers, electronic drums and guitars.
They played live in january 1984 at the Detroit Institute of Arts with The Polish Muslims, Blue Pigs and Other Voices. In may 1984 at The Shores Theatre they played with the Walk Thru Walls (a band that sounds very similar) along with movies projection of Daffy Duck, Bugs Bunny and Roadrunner cartoons between the musical sets. 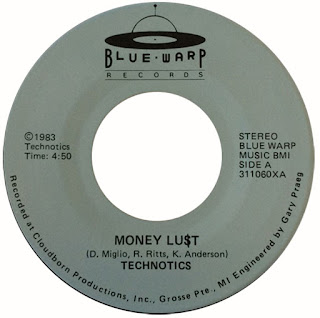